Thanks Giles, what a great review.

But the relevant part for us is reproduced below.

Such as that which I was served recently and most unexpectedly at a fish and chip shop in the village of Broadway in Worcestershire. You don’t really go looking for good fish in the Cotswolds – it’s so far from the sea – but the village is renowned for its giant (and quite wonderful) adventure playground, which is what drew us to it over the course of the October-November half-term. And afterwards we had to eat.

There was a fantastic-looking deli where we stocked up on mid-morning pies and sausage rolls for the children and a posh restaurant called Russell’s which looked terribly smart but wasn’t what we were after. And then I saw that round the back of the same building was Russell’s Fish & Chips, presumably owned by the same people but this time aimed at, well, me.

Inside, it was clean and modern and pretty with restrained quantities of jolly nautical tat, blackboards revealing daily specials and a separate board that announced, “The potatoes we are chipping are marfona” – not a variety I know but I am quite certain that anywhere offering to name your chip potato variety will probably feed you very nicely.

And it did. My length of cod was generous in size and every bit as good as the idealised version I rhapsodised about above, served on paper in a box with fantastic chips (dry, firm, nutty), a paper pot of good tartare, smashed peas and a lemon wedge. £9.95 for that is absolutely fine.

A big old-school prawn cocktail for £4.95 was beautifully done but some deep-fried squid was a bit overcooked and if you’re battering gherkins, I think you want to use the brined variety and dry them well first, because big heimische pickles are too wet and sweet and watery and rather boil inside like sweeties.

But this was absolutely top-quality fish and chips, with haddock also offered, as well as plaice either breaded or grilled, whole tail scampi, fish cakes or fish finger sandwich and assorted non-fishy things. Plus a useful and well-priced children’s menu. Service was knowledgeable, friendly and quick, the village itself is an utter delight and the ideal spot to consume what I know without question to be the best possible way to eat cod that there is in this world. 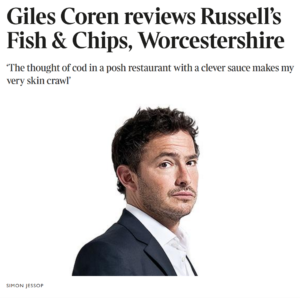